Originally named Hunting Island and then Long Island, it’s thought to be at least 25,000 years old, and first inhabited by the indigenous Seewee Indians. The Seewees were said to have greeted the first English settlers to the area by swimming to the ships and carrying the travelers to shore. Whatever contributions the English made to the Seewees reportedly inspired some of them to try and reach England in their canoes-all lost at sea in storms.

The island remained without permanent inhabitants until the late 19th century when the island became recognized by locals of the area as a refuge from the summer heat and tempo of Charleston. The island was purchased in 1899 by J.S. Lawrence, who renamed it the Isle of Palms. In 1906 a 50 room resort hotel was built to offer the first permanent accommodations. By 1912, James Sottile constructed a spacious beach pavilion and an amusement park with Ferris wheel. Accompanying transportation developments enabled residents of Charleston to catch a ferry to Mt. Pleasant, and from there catch a rail trolley car to Sullivan’s Island and the Isle of Palms. Access became even easier in 1929 when the ferry across the Charleston harbor was replaced by the Grace Memorial Bridge. A bridge link to the islands was established in 1946, and at that time most of the Isle of Palms was purchased by developer J.C. Long of The Beach Company. 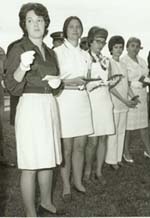 As he began development, J.C. Long provided low-cost housing to veterans returning from World War II. The Isle of Palms slowly developed into a residential bedroom community of greater Charleston while still maintaining its charm, natural beauty, and desirability as a summertime getaway destination.

In the 1970’s the rest of the world discovered the joys of the Isle of Palms, and real estate development blossomed. In 1975, the Sea Pines Co., one of the major developers of now renowned Hilton Head Island, established a similar resort enterprise on 900 acres of land at the northeast end of the island. Originally named The Isle of Palms Beach and Racquet Club it was renamed The Wild Dunes Beach and Racquet Club in 1984 and today is simply called Wild Dunes. With nationally recognized golf courses and other resort amenities, Wild Dunes has become a major vacation locale on the South Carolina coast.

In spite of the changes wrought over the last 20 years, with its six miles of white, sandy beaches, the Isle of Palms remains as much a place of beautiful serenity for residents and visitors today, as it was for the Seewee Indians and the colonists who followed. 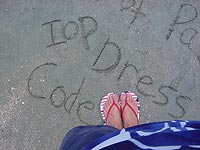 Boating opportunities include kayaks, canoes, sailboats, fishing boats and even luxury harbor cruises. Personal watercraft like Jet Skis can be rented to explore nearby islands.

Fishing contests often originate at Isle of Palms Marina. Or you can just cast your own line from the beach.

Getting around the island is easy, with most roads having marked bike paths for safety. Bicycle and rollerblade rentals are available on the island.

Golf and tennis are easy to pursue on the island. The island has two world-class golf courses, the intimate Harbor Course and the Links Course, and the Charleston area has many other well-known courses. Both clay and hardcourt surfaces are available to tennis enthusiasts on the island.

Of course, the beach is often the center of activity. For enjoying the waves, bodyboards are available for rental. To keep your toes in the sand, a game of beach volleyball is never far away. Picnic and changing areas are available at Isle of Palms County Park. 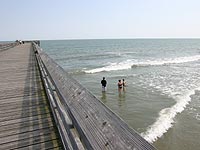 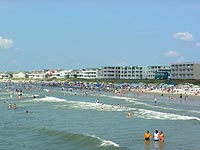 Beachcombing is always a popular activity. A large variety of seashells collect on our beaches from sand dollars to whelks, to olives, to angel wings. It’s fun to find shell treasures, but please leave the live shells on the beach or throw them back into the ocean.

When walking around the island, watch the sky and water for wildlife. Osprey nests can be spied, pelicans soar and dive for their dinner, dolphins frolic, and giant loggerhead sea turtles come ashore to lay their eggs. If you’re lucky, you might see hundreds of baby turtles making a mad dash for the ocean.